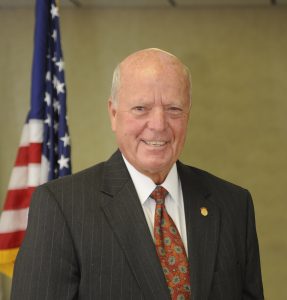 Raised in Odessa, Texas, Tuggle received his undergraduate degree in Business Administration from the University of Texas at Austin. He later attended the Southwest Graduate School of Banking at Southern Methodist University and the National Commercial Lending School at the University of Oklahoma and other banking schools and seminars.

Tuggle works closely with the Command Staff and the Bank Liaison Office on Fort Hood seeking ways to improve products/services for the safety and well being of the soldier. He implemented the first in-store Banking Agreement with the Defense Commissary Agency and opened the first bank located in a commissary. He also negotiated with the United States Postal Service placing postal operations in each of the free-standing bank locations on Fort Hood (a banking first).

Fort Hood National Bank has been the recipient of the coveted Department of Defense “Military Bank of the Year” Award ten of the last 13 years for providing exemplary service to the soldiers and families of Fort Hood.

Tuggle is the recipient of the coveted Roy J. Smith Award for Outstanding Community Service and is also one of the few civilians to become a member of the exclusive Sergeant Audie Murphy Club.  Tuggle received the coveted MG Anthony J. Drexel Biddle Medal Award from The Association of United States Army for his outstanding and continuous service to the U.S. Army Soldier.

Terry’s wife Joyce is a native of Texas. They have two sons who also reside in Texas.