Congratulations to Armed Forces Bank, Broadway Bank, and First Arkansas Bank & Trust for receiving the America Saves Designation of Excellence Award.  You all have gone above and beyond and deserve to be recognized for all you do to support saving in your military communities. 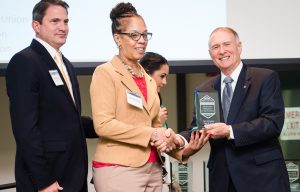 The 15 banks and 19 credit unions were recognized at the 2016 America Saves National Savings Forum on May 18th, and received a Designation of Savings Excellence seal for their website along with a plaque. “For years, hundreds of banks and credit unions have participated in America Saves Week and Military Saves Week by encouraging individuals to save money and build wealth,” said Nancy Register, America Saves Director. “This designation allows us to recognize banks and credit unions that successfully encouraged individuals to save money during the week. We commend these 34 institutions and hope to award hundreds in the future.”

Steve Bartlett of Treliant Risk Advisors chaired the committee of bank leaders. “These designations recognize those institutions that have acted affirmatively on behalf of the long-term interests of their customers and their families,” says Bartlett. “Savings equals long-term security and quality of life.”

America Saves Week is an annual opportunity for financial institutions to encourage individuals to save money – with an emphasis on reaching low- to moderate-income families. America Saves is recognizing banks and credit unions that succeeded in promoting savings or other wealth building accounts and had high levels of accounts opened or added to during America Saves Week 2016.

For more information about the America Saves Designation of Excellence visit:

America Saves, a campaign managed by the nonprofit Consumer Federation of America, seeks to motivate, encourage, and support low- to moderate-income households to save money, reduce debt, and build wealth. The research-based campaign uses the principles of behavioral economics and social marketing to change behavior. Nonprofit, government, and corporate groups participate in America Saves nationally and through local, regional, and statewide campaigns around the country. America Saves encourages individuals and families to take the America Saves pledge and organizations to promote savings year-round and during America Saves Week. Learn more at AmericaSaves.org and AmericaSavesWeek.org.